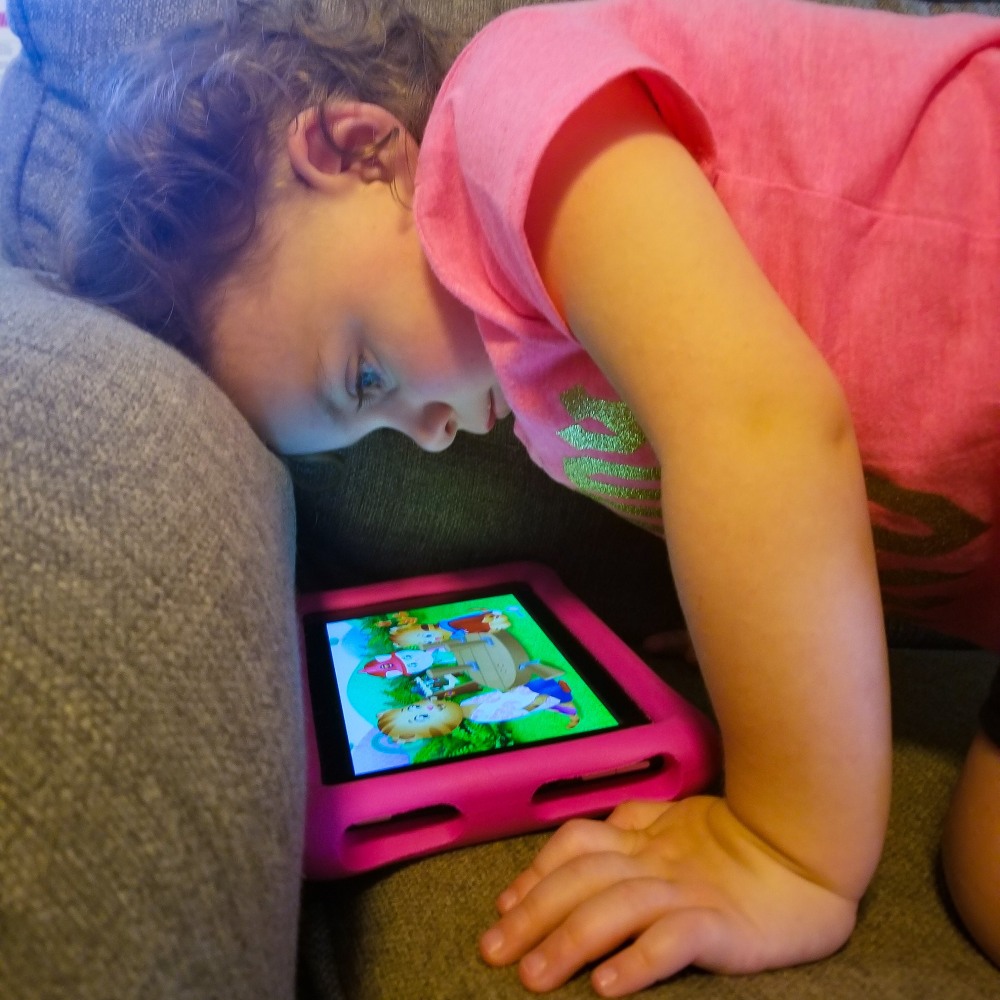 In my last blog, SUPERishDAD Sees the Sea, I told you that I bought Zoey a Kindle Fire 7 Kids Edition (which from this point forward will only be referred to as the Kindle because I’m not typing that over and over again for the rest of the blog) for our vacation to Daytona Beach, FL. I’m sure you SUPERishPARENTS out there would love to know if this product meets the requirements to obtain the coveted SUPERishDAD Seal of Approval, so let’s find out together shall we? 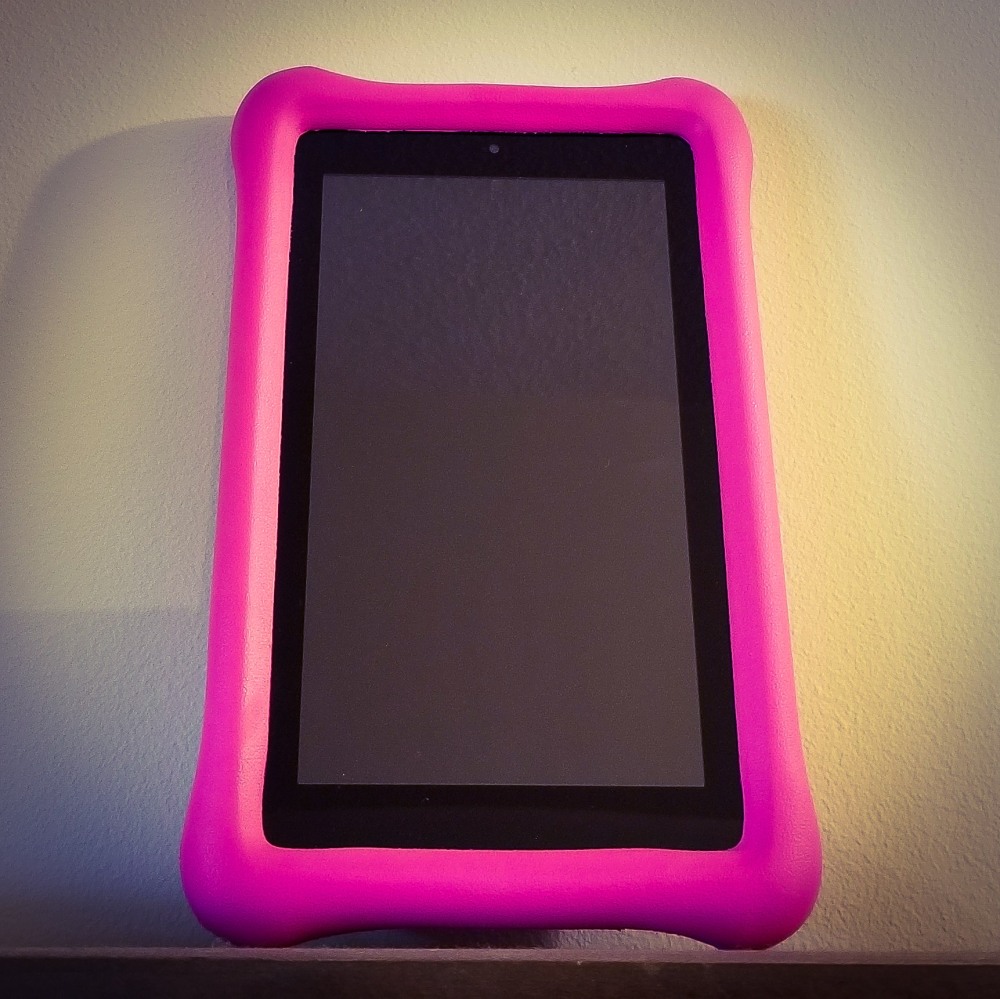 I like the overall look of the Kindle. All tablets are similar, so there isn’t much to be said about that. Either you like rectangles or you don’t.

We got the version with pink foam. It was true to the pictures on Amazon, which I appreciate because I have received a few items that looked slightly different upon arrival.

The pink foam seems very durable.  I think it could be dropped from fairly high and absorb the impact with minimal damage.  So far ours has only fallen (or been thrown) from about 2 feet, but it’s survived that with no problems.

The foam also helps with grip which is definitely beneficial when being used by a  toddler. 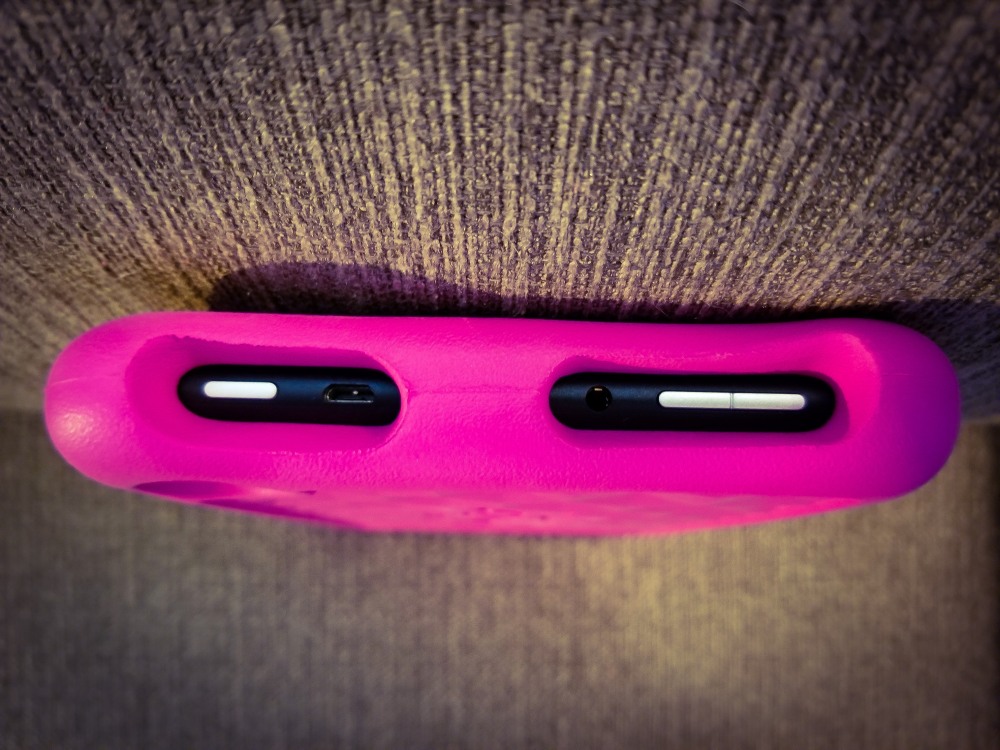 The cutouts in the foam around the top, which allow access to the volume buttons, the power button, the headphone jack, and the charging port are nicely placed.  I have no problem hitting the buttons or plugging in the power cable.

There’s one more cutout on the bottom for the speaker.  It works fairly well allowing the sound to pass through, but the actual speaker is located on the back of the Kindle, not the bottom of the Kindle.  I’m not sure why the designers didn’t put a cutout on the back directly over the speaker because the foam does muffle the sound slightly.  It looks like they tried to account for placement of the cutout by putting a depression in the foam underneath the speaker to send the sound out the bottom.

If you want access to the memory card slot, you must remove the foam to get to it.  Once the foam is off, the port is easily accessible.  Amazon must have had parents in a hurry in mind because there is another small cutout in the memory card slot so that a fingernail can easily open the port.

The foam is easy to take on and off for an adult, but fits tightly enough that a toddler shouldn’t be able to mess with it. 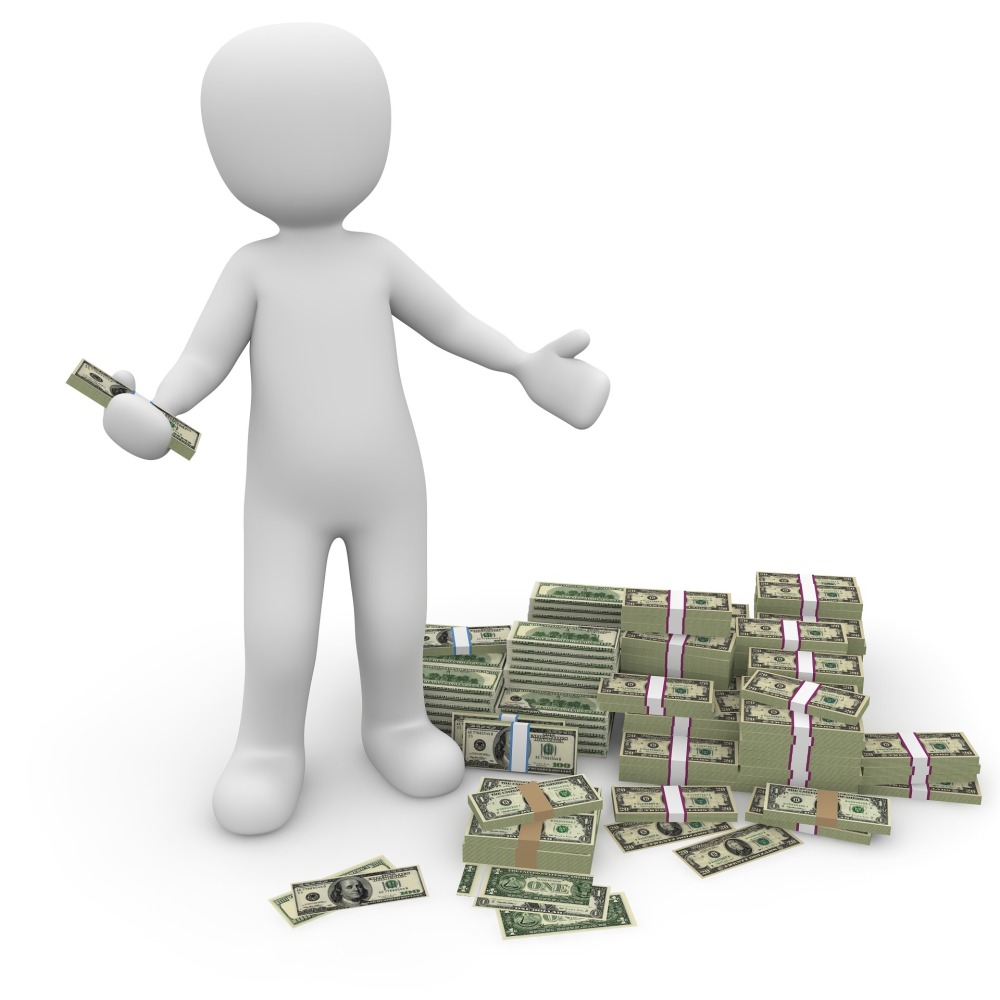 At the time of this writing, the Kindle is priced at $99.99 (come on, just make it $100 Amazon, you’re not fooling anyone).  I think that’s reasonable.  With that said, you have to have realistic expectations for this product, because if you don’t, you could be disappointed.

This is essentially a device designed for reading books and surfing the web.  It’s by no means a powerhouse and it’s not meant to compete with an iPad or a Samsung Tab S3.  They might all have similar functions, but there are big differences in the hardware and capabilities. 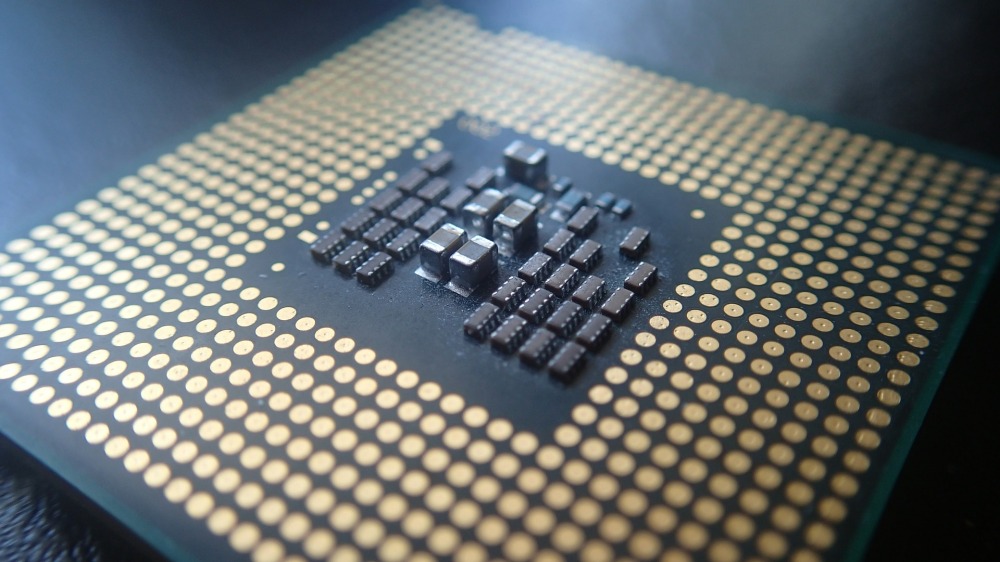 The one we bought is the 7in screen version and its resolution is 1024 x 600.  There are other versions of the Kindle for Kids that come in 8in and 10in screens with slightly higher specs and slightly higher price tags, too. The shows and games I have seen all look nice and clear with our 7in version.

The storage that comes with the 7in screen is only 16GB which is not enough.   Even though it says it comes with 16GB, you really only have access to about 12GB because the operating system takes up close to 4GB.  I bought a 32GB MicroSD Card when I bought the Kindle because shows and games take up a lot of space and the internal storage wouldn’t be enough.  If you buy the 7in version, know that you will need to spend an additional 20 bucks on more storage.

The battery is said to last 8 hours.  We drove all the way back from Florida to Tennessee in one day which is a 9+ hour drive and Zoey’s tablet still had battery left when we pulled in the driveway.  Granted, she wasn’t on it the whole trip, but she did play with it for a good bit and the battery handled it well.

The front facing camera is a VGA camera and the back camera is 2MP.  They work fine for my 2 year old daughter but they are not great cameras.  Again, it’s a $100 tablet, so corners have to be cut somewhere and these cameras work well enough for a toddler.

The best part of the Kids Edition of the Kindle Fire is the 1 year of FreeTime Unlimited.  It gives you full access to a ton of games, TV shows, educational apps, and children’s books.  I was honestly amazed by the amount of content you get right out of the box.

It really does have some fun games that are also educational.  I watched Zoey pop balloons with letters and numbers while the game calls them out as she pops them.  Zoey worked puzzles and learned about shapes.  There are great books for me to read to her that would add up quickly if I bought all the physical copies.

We encountered the biggest issue with the Kindle during our trips to and from Florida.  It kept freezing and returning to the home screen in the car.  It was very frustrating for Zoey which ended up being irritating for us.  Lisa kept having to reach behind the seat to get the Kindle to unlock it over and over again.

Full disclosure, the night before we left for the beach, I tried to download a ton of games in preparation for the long trip.  When I woke up the next morning, I was surprised to find out the Kindle was still trying to download games.  I had tried to download too much and the storage was full.  I assumed on the way down that caused the crashing problem.

When we got to the hotel, I deleted off a several apps to free up space.  However, even with space available, the Kindle still crashed periodically for the rest of the trip home.

After returning home, Zoey only gets to play with it at night for about an hour, but since then, it has not crashed like before.   I’m not sure if an update occurred that fixed the problem or if it’s something else, but the situation seems to have resolved itself.

Even at the time of this writing, I have gone back to the games she played and none of them have crashed.  I wish I had a better understanding of why the problem corrected itself.

When the apps were crashing, I really thought it was due to the hardware not being powerful enough to run the apps properly.  But now that they aren’t crashing, I wonder if being connected to WiFi changed something.

One of the reasons I thought the hardware might be an issue is because many apps have a long load time when you initially open the app.  This causes some irritation for Zoey who picks an app to play and then keeps tapping it again and again because it doesn’t look like it’s doing anything.

Other than that, the Kindle is fairly user friendly.  I like that it separates the normal functions for adults from the children’s area.  This ensures that they won’t get into anything they aren’t supposed to.

It should be noted that its hardware does make everything a little slow.  Even just swiping left or right on the home screen has a little bit of lag.  It doesn’t have smooth transitions.

The Kindle for Kids comes with a 2-Year Worry-Free Guarantee.  Amazon.com proudly states, “If they break it, we’ll replace it.  No questions asked.”  That sounds really good and gives us parents peace of mind.

However, I noticed a couple of reviews that said it actually is kind of a pain.  Even though it says, “No questions asked”, people stated that they definitely work hard to troubleshoot your problem which requires a lot of questions.

I can understand this to a certain degree, but “no questions asked” makes me think no questions are asked.  Most people reported that even if they receive a “new” kindle to replace the old one, it’s refurbished.  So it sounds like you don’t get another brand new Kindle which I found somewhat disappointing. 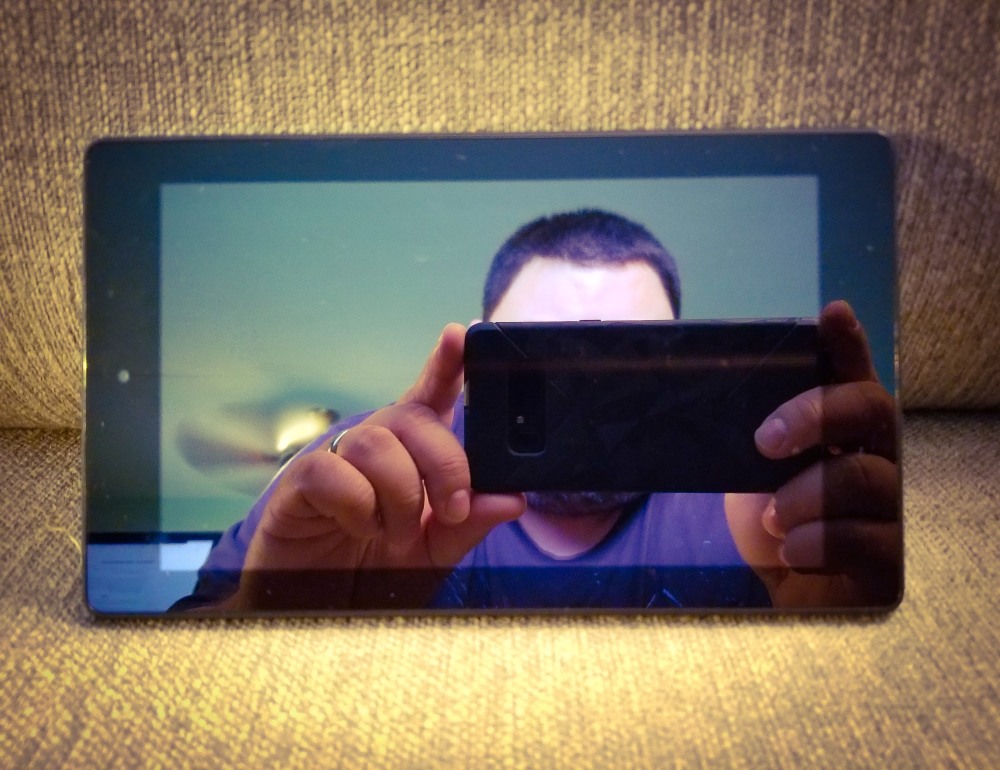 I’m kind of on the fence about this one.  On the one hand, it’s a really good price for the functionality, as long as you understand the hardware is limited.  I also love the 1 year of FreeTime Unlimited.  I’m happy with the amount of apps.  I was impressed with the educational components added to many games.

On the other hand, the crashing was a huge cause for concern.  It’s done a lot better since we returned home but I still have no idea what fixed it or if it will happen again.

I’m also concerned about the warranty.  While the 2 year warranty sounds really good, it looks like it’s not as solid as Amazon claims.  It definitely sounds like questions are asked and if you get a replacement Kindle, it’s a refurbished one.

If you get the Kindle Fire 7 Kids Edition, know that it’s not meant to compete with other more expensive tablets.  Those other tablets will out perform the Kindle, but that’s why they cost so much more.

The kindle shines with its price, durability, and FreeTime Unlimited.

Assuming the crashing problem is fixed…

I HERBY GIVE THE KINDLE FIRE 7 KIDS EDITION THE SUPERishDAD SEAL OF APPROVAL! 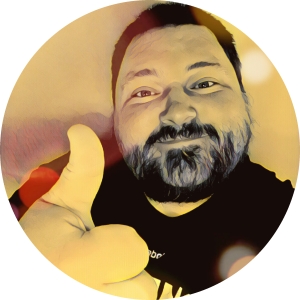